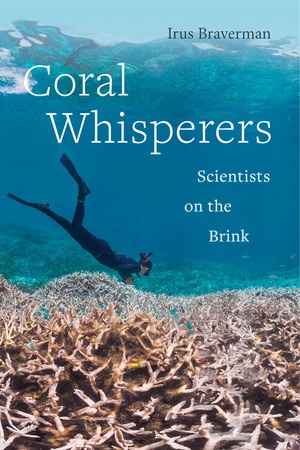 ing event devastated many of the world’s precious coral reefs. Working on the front lines of ruin, today’s coral scientists are struggling to save these important coral reef ecosystems from the imminent threats of rapidly warming, acidifying, and polluted oceans. Although many of the scientists interviewed for this project have insisted that their work has little to do with the law, a mere scratching of the surface has revealed law’s prominence in their research—if not formally, then informally through guidelines, procedures, and standards for management and protection.

Science and law are entangled in many ways. Braverman is especially concerned with the more mundane and contemporary entanglements between coral life and law—law’s breathing life into corals by protecting their continued existence, and coral’s breathing life into law by providing it with the materiality required for governance. Indeed, corals are saturated with law, which protects, ignores, or damages them—or any combination thereof; they are also saturated with science, which names, classifies, and lists them, thereby making them legible, or illegible, to the law. Braverman’s talk will draw on multiple interviews with administrators and managers to highlight, in particular, how the traditional focus on species by conservation laws such as the U.S. Endangered Species Act disadvantages corals and, relatedly, how ill-equipped such laws are when dealing with the imminent threats to coral life on a global scale.

While this fundamental incapacity of law to see, manage, and protect coral is, for the most part, a systemic failure, leading to much frustration and despair toward the law on the part of coral scientists, law can also be used as a tool for resistance and change, thus providing hope for corals in the Anthropocene. Braverman’s book Coral Whisperers: Scientists on the Brink is forthcoming at University of California Press, November 2018.

Irus Braverman is professor of law and adjunct professor of geography at the University at Buffalo, the State University of New York (SUNY). Her research lies at the    intersection of law, geography, anthropology, and Science and Technology Studies, and spans myriad spaces, including forests, checkpoints, zoos, and oceans. Braverman is author of “Planted Flags: Trees, Land, and Law in Israel/Palestine” (2009), “Zooland: The Institution of Captivity” (2012), and “Wild Life: The Institution of Nature” (2015), and editor of several collections, including “The Expanding Spaces of Law: A Timely Legal Geography” (2014) and “Gene Editing, Law, and the      Environment: Life Beyond the Human” (2017). Her monograph “Coral Whisperers: Scientists on the Brink” is forthcoming with the University of California Press this fall.